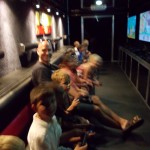 “I wanted to email and thank you for your professionalism of handling all of the rug rats.  Jason was SO surprised when he saw all of his friends insie the game theater waiting!  This was a great idea…”  – Jackie T.

“I am surprised how well the Game Coach handled all of the kids.  They all wanted to play different games and had questions and demands, but you guys were cool and calm.  WHAT A GREAT IDEA.  Who says you can’t please all 20 kids at a party?….”   – John and Cindy S.

“The invitations, the games and the grandest entrance ever.  My husband wants to have a superbowl party now.  Two neighbors called me for your number, so they’ll be calling you….”  Fres L.

“The kids should have brought sleeping bags because they could have spent the night in that trailer. …. It’s the best party ever, ever, ever.  We’ll be booking next year.  …Thanks for making Tyler feel like a king. That as a nice touch….”   – Allyson H.

“Your truck was the biggest attraction at the fundraiser by far and thank you for handling the tickets.  It was chaotic in a good way. People bought tickets just for you.  I know people will be calling you for parties after yesterday….”     Michelle N.

“Well done.  The staff want to have another battle soon.”    Coca-Cola

“I posted info about our party on Facebook and RAVED about it.  I know this is the coolest party thing, now!  Of course, we are the trendsetters, lol…”    Denise K.

“I’ve never had a party where everyone is laughing and having a great time every minute.  I’m used to a few problems, but this was perfect.”  Phillip and Jen

“My husband Rick is not easily impressed.  I have to tell you that he came back in the house and said that your game theatre is the best party in the last decade around the Bennett family.  The only hard part was getting the boys out of there!  Thanks for staying over longer than you were supposed to…..”

“It’s a refreshing idea that has injected some great morale… Thank you..  Everyone likes this better than the ropes course…”   Toyota

“The truck pulled up to the house and the kids went wild.  That’s when I knew it was going to be a great party….Sorry if things got too insane for you guys.  They were just so excited….”  Zayn F.

This is the best birthday party I have ever had- Michael S.

The First Birthday part I’ve hosted that I didn’t want to tear my hair out-Alex M.

Thank you for giving my son this party.  The kids at school will now consider him “cool”.- Steve A.

Booked Rolling Video Games for my son’s 7th birthday on May 17th.  Had about 12 kids who had a Great time!  Stephen was very nice and even arrived 30 mins early.  The trailer was clean and had up to date games.  Stephen was very accommodating and provided extra time for the kids.  It was also a warm day and the trailer was air conditioned so no complaints from any of the kids.  My son already mentioned that he wants to book Rolling Video Games for his 8th birthday.  I would highly recommend booking them if you want your child to have a fun party.  Thanks Stephen!-M G

I was at a three hour party, this is one of the coolest things that you can get. All the kids were entertained and there were more games than you could imagine. The owner, Stephan, was extremely nice and always helped us. A great things you could do was link all the systems and get like 20 people on one game, we had a blast with that part. I would definitely recommend this to anyone who likes video games or a great time!-Phillip H.

We just finished a 3 hour party with Stephen.  We thoroughly enjoyed the experience.    Lots of great games for all ages.   We had 16 kids, most of them over the age of 15.  The multi player games where we were all playing at once was a highlight and the source of a lot of laughter.

The equipment was in good shape and very clean.

I would recommend a video game party for anyone who wants to try something new.-Scott

I can’t say thank you enough! My 10 year old had the best birthday ever. Steve is awesome with the kids, has all the latest games. Thanks Steve and the rolling video game truck my son and his 16 friends had a blast last night.- Jennifer C Brampton